Perspectives from Above the Noise -- Week of September 11th, 2017

Chart of the Week: Economic Impact of Natural Disasters is Short-Lived 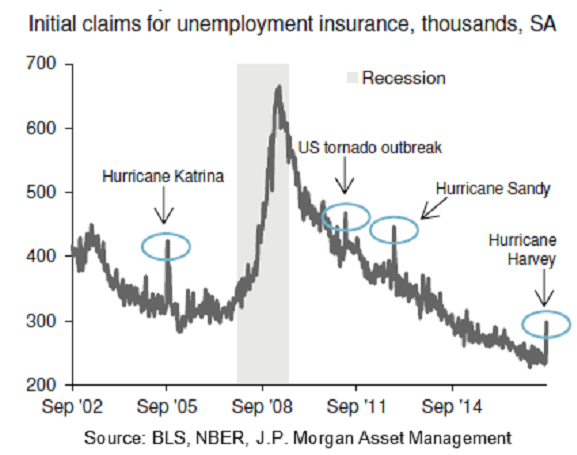 With any natural disaster, it is important to separate human tragedy from economic impact. That said, while natural disasters tend to coincide with short-term economic weakness, history suggests that economies are, for the most part, able to rebound over the medium term. As shown in Chart 1, the U.S. has seen four major natural disasters over the past 15 years, each of which led to a significant spike in jobless claims in the immediate aftermath. However, in each instance, these dislocations were limited to the affected region and did not meaningfully impact the longer-term economic trend..

While refinery disruptions have boosted gasoline prices and could hurt the consumer, insurance payments to replace destroyed vehicles could have the opposite effect. Either way, according to J.P. Morgan, the economic impact should be temporary. Moreover, events such as Hurricanes Harvey and Irma serve as a reminder of why portfolio diversification is so critical – by having some assets that zig when other assets zag, it is possible to create a smoother, less volatile portfolio.