Perspectives from Above the Noise -- Week of November 27th, 2017

U.S. stocks pushed higher during the shortened Thanksgiving Day holiday week as investors embraced generally positive economic data and expressed optimism for stronger-than-expected holiday retail sales. Including Friday’s abbreviated session, the S&P 500 has closed at an all-time high for 54 out of 225 trading sessions this year. On average, this represents a new record every four days, the third–most since 1928. Among key economic data last week, the Conference Board’s Leading Economic Indicators Index rose 1.2% last month, topping forecasts. This follows a revised 0.1% September increase that was originally reported as a 0.2% decline. Also favorable, Treasury Secretary Mnuchin said he expects the Senate will approve a Republican tax reform bill and send it to President Trump for approval by Christmas. On Friday, the S&P 500 finished above the 2,600 level for the first time, ending at 2,602.42.

Chart of the Week: Consumer Sentiment Cools in November, but Remains High 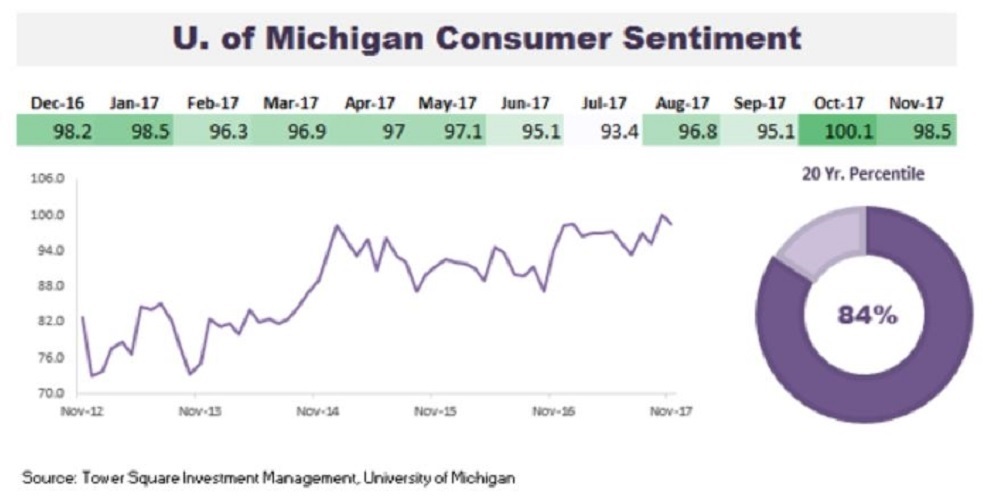 The University of Michigan Consumer Sentiment Index is a survey of consumer confidence conducted via telephone to gather information on consumer expectations regarding the economy. As Chart 1 illustrates, November’s consumer sentiment reading was slightly lower than October, but still registered its second highest reading since 2004. Moreover, November’s consumer sentiment reading of 98.5 is stronger than 84% of all readings in the last 20 years. Consumer confidence at this level is a positive sign for continued strength in consumer spending and great news for retailers ahead of the holiday shopping season. It is not a surprise that consumer confidence is elevated with the unemployment rate at its lowest level since 2001 and the stock market in its ninth year of the bull market.
Some materials are chosen by the Cetera Investment Management team and summarized by Jason Vitucci who is not affiliated or registered with Cetera. Cetera Investment Management provides investment management and advisory services to a number of programs sponsored by First Allied Securities and First Allied Advisory Services. Cetera Investment Management individuals who provide investment management services are not associated persons with any broker-dealer. International investing involves additional risk, including currency fluctuations, political or economic conditions affecting the foreign country, and differences in accounting standards and foreign regulations. These risks are magnified in emerging markets. Investing in companies involved in one specified sector may be more risky and volatile than an investment with greater diversification.