Perspectives from Above the Noise -- Week of November 21st, 2016

Chart of the Week: Can Small Cap Strength Last? 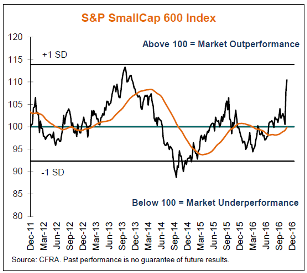 The S&P SmallCap 600 soared 10.6% in the days between November 8th and 18th. It was the best performing benchmark return within the S&P Composite 1500, as the S&P MidCap 400 gained 6.1%, and the S&P 500 rose 2.0%. CFRA Research, the new parent of S&P Global Intelligence, believes these performances are based on two things: 1) the exiting of positions placed ahead of the then highly-expected Democratic victory, and 2) the speculation that on a macro level President-elect Trump’s policies will lead to higher U.S. GDP and EPS growth. The first question on many investors’ minds is “Will it last?” Will investors continue to favor small-cap stocks, due to their limited fallout from a strengthening dollar? Certainly, a shift in sentiment has occurred, which could carry on to the end of the year. However, CFRA Chief Investment Strategist Sam Stovall believes that in many cases, such moves have been too far, too fast.

Granted, the S&P SmallCap 600 just underwent an 8% pullback in price from September 7th through November 3rd and later got back to breakeven on November 11th. The index has advanced nearly 3% since then. In all, the S&P SmallCap 600 is up 14% from its pullback low. Up until election day, the S&P SmallCap 600 was trading in line with the S&P 500 on a trailing 52-week relative strength basis, but since then, as the chart above shows, the small-cap index’s relative performance has shot up to nearly one standard deviation above its 20-year average. We think it would be unrealistic to believe that this parabolic advance will continue. According to Stovall, a settling down will need to occur, before a more sustainable upward sloping trajectory can again be established – “as our forecast projects the S&P Small-cap 600 should see EPS growth of 18.7% in 2017 versus 11.7% for the S&P 500.”