• Benchmark Yields Edge Lower. The yield on benchmark 10-year Treasury notes flirted with 3% on Wednesday, but yields reversed direction later that day after Fed policymakers announced no-change in interest rates and gave no indication of accelerating the pace of future rate hikes. The U.S. Dollar Index advanced 1.12%, while the yield on benchmark Treasury notes slipped 7 basis points to end the week at 2.951%. 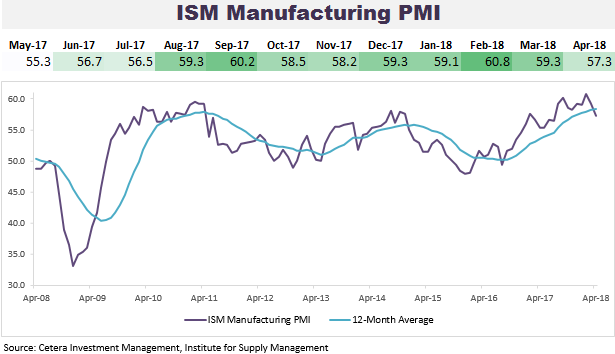 The ISM survey did mention that businesses are cautious about the uncertainty surrounding the impact of tariffs. Another concern is that signs of inflation were reported in the ISM data, due to the rising costs of raw materials, as the ISM Prices Paid Index climbed to a seven-year high. In our view, manufacturing activity will likely remain healthy this year because of stable global economic growth; lower taxes will likely offset the negative implications surrounding tariffs and the moderate pickup in inflation.