U.S. stocks ended slightly lower on Friday, paring gains for the week as disappointing economic growth data overshadowed strong earnings from several leading technology companies. The Commerce Department reported that the economy expanded by 0.7% in the first quarter, the slowest growth pace in three years, missing economists’ 1% consensus estimate and down from 2.1% GDP growth the quarter prior. Weak consumer spending was the primary drag on growth, up the least since 2009. In positives, residential spending jumped 13.7% and overall business investment rose 9.4%, the most since 2013. With nearly 300 in the S&P 500 reporting first quarter earnings, approximately 85% have topped analysts’ projections. Moreover, 66% of S&P 500 companies have exceeded their revenue forecasts, their highest level since the second quarter of 2011.

For the week, the S&P 500 gained +1.53% and the Dow Industrials advanced +1.91%. Led by strong earnings from technology companies, the MSCI EAFE (developed international) jumped +3.09%.

Chart of the Week: A Healthy Tortoise Economy 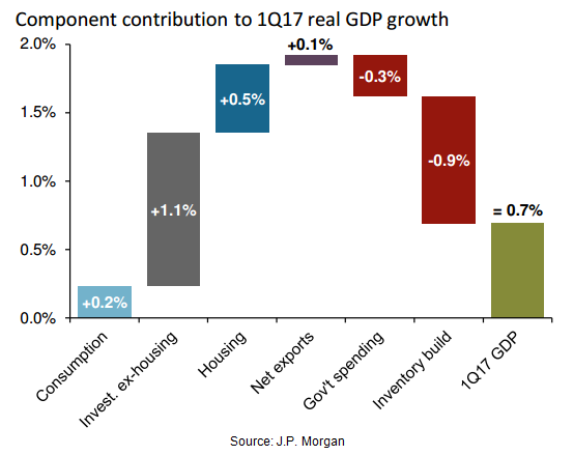