Perspectives from Above the Noise -- Week of December 5th, 2016 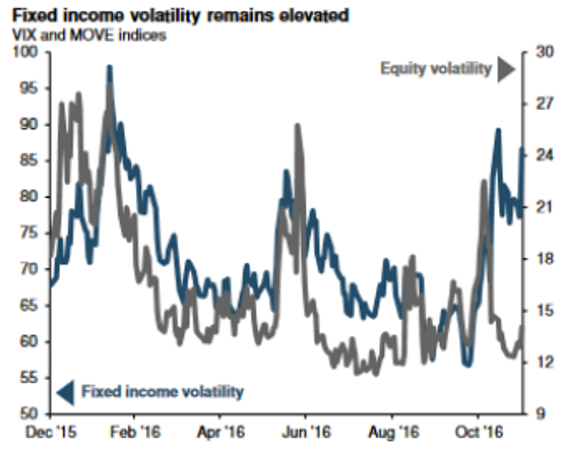 Immediately post-election, volatility spiked in fixed income and equity markets as uncertainty translated into risk aversion and the equity market sold off and rates rallied. However, since the election, there has been a reversal of the market’s initial reaction, with the S&P 500 reaching a new all-time high and the 10-year Treasury yield increasing by over 50 basis points. This reversal came as investors digested the move from monetary policy, which is supportive for both equity and bond markets, to looser fiscal policy, which could generate inflationary pressure and tighter monetary policy, both of which are negatives for the bond market.

Interestingly, as the chart above shows, this dynamic has resulted in very different levels of volatility in stock and bond markets. Rate volatility remains elevated as investors try to estimate the magnitude of Trump’s fiscal expansion and thus its impact on inflation and rate hikes by the Federal Reserve. Equity market volatility, on the other hand, has fallen close to the previous 2016 summer low. Volatility in the fixed income market will likely stay elevated until there is more clarity regarding Trump’s policy mix and the subsequent pace of rate hikes. The Fed’s December meeting should produce a rate hike, and importantly, the corresponding press conference will be helpful for investors in gauging whether the Committee’s views on the economy have changed and thus warrant a more hawkish stance.