Perspectives from Above the Noise -- Week of December 2nd, 2019

Treasurys End Mixed  U.S. Treasury prices ended mostly lower Friday, sending the yield on 10-year notes slightly higher to end the week and month at 1.78%, while shorter-term two-year notes slipped to 1.61%. For the week, the U.S. Dollar Index was unchanged, while WTI crude oil tumbled 4.5% to end November at $55.17/barrel.

These links to outside web sites are provided as a courtesy and are not under the control of Cetera Investment Management LLC. For more details, pleasesee the “Disclosures” section.

Chart of the Week: Home Prices Level Off 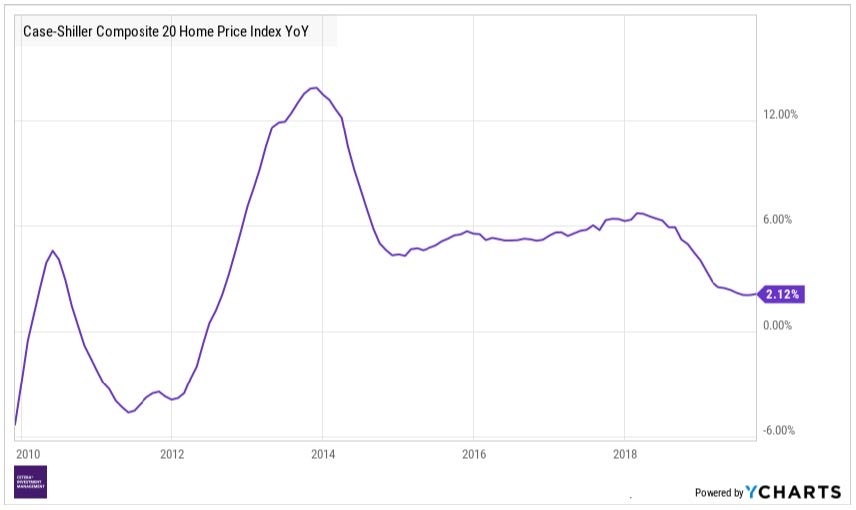 Home price growth has decelerated since early 2018 following the reduction in housing-related tax deductions as part of the 2018 tax reform package. For the first time in over a year, year-over-year home price growth moved higher in September, with year-over-year growth for the 20 largest housing markets rising 2.12%, ahead of 2.06% growth in August. Falling mortgage rates are beginning to stabilize home price growth.

This report is created by Cetera Investment Management LLC.

Cetera Financial Group (“Cetera") is a leading network of independent firms empowering the delivery of professional financial advice to individuals, families and company retirement plans across the country through trusted financial advisors and financial institutions. Cetera is the second-largest independent financial advisor network in the nation by number of advisors, as well as a leading provider of retail services to the investment programs of banks and credit unions.

Through its multiple distinct firms, Cetera offers independent and institutions-based advisors the benefits of a large, established broker-dealer and registered investment adviser, while serving advisors and institutions in a way that is customized to their needs and aspirations. Advisor support resources offered through Cetera include award-winning wealth management and advisory platforms, comprehensive broker-dealer and registered investment adviser services, practice management support and innovative technology. For more information, visit cetera.com.

No independent analysis has been performed and the material should not be construed as investment advice. Investment decisions should not be based on this material since the information contained here is a singular update, and prudent investment decisions require the analysis of a much broader collection of facts and context. All information is believed to be from reliable sources; however, we make no representation as to its completeness or accuracy. The opinions expressed are as of the date published and may change without notice. Any forward-looking statements are based on assumptions, may not materialize, and are subject to revision.

All economic and performance information is historical and not indicative of future results. The market indices discussed are not actively managed. Investors cannot directly invest in unmanaged indices. Please consult your financial advisor for more information.

Additional risks are associated with international investing, such as currency fluctuations, political and economic instability, and differences in accounting standards.

The Dow Jones Industrial Average is a price-weighted average of 30 significant stocks traded on the New York Stock Exchange and the NASDAQ.

The S&P 500 is an index of 500 stocks chosen for market size, liquidity and industry grouping (among other factors) designed to be a leading indicator of U.S. equities and is meant to reflect the risk/return characteristics of the large cap universe.

The Russell 2000 Index measures the performance of the small-cap segment of the U.S. equity universe and is a subset of the Russell 3000 Index representing approximately 10% of the total market capitalization of that index. It includes approximately 2000 of the smallest securities based on a combination of their market cap and current index membership.

The Bloomberg Barclays US Aggregate Bond Index, which was originally called the Lehman Aggregate Bond Index, is a broad based flagship benchmark that measures the investment grade, US dollar-denominated, fixed-rate taxable bond market. The index includes Treasuries, government–related and corporate debt securities, MBS (agency fixed-rate and hybrid ARM pass-throughs), ABS and CMBS (agency and non-agency) debt securities that are rated at least Baa3 by Moody’s and BBB- by S&P. Taxable municipals, including Build America bonds and a small amount of foreign bonds traded in U.S. markets are also included. Eligible bonds must have at least one year until final maturity, but in practice the index holdings have a fluctuating average life of around 8.25 years. This total return index, created in 1986 with history backfilled to January 1, 1976, is unhedged and rebalances monthly.

The Bloomberg Barclays US Corporate High Yield Index measures the USD-denominated, non-investment grade, fixed-rate, taxable corporate bond market. Securities are classified as high yield if the middle rating of Moody's, Fitch, and S&P is Ba1/BB+/BB+ or below, excluding emerging market debt. Payment-in-kind and bonds with predetermined step-up coupon provisions are also included. Eligible securities must have at least one year until final maturity, but in practice the index holdings have a fluctuating average life of around 6.3 years. This total return unhedged index was created in 1986, with history backfilled to July 1, 1983 and rebalances monthly.

The Bloomberg Barclays US Municipal Bond Index covers the USD-denominated long-term tax-exempt bond market. The index has four main sectors: state and local general obligation bonds, revenue bonds, insured bonds, and prerefunded bonds. Many of the subindicies of the Municipal Index have historical data to January 1980. In addition, several subindicies based on maturity and revenue source have been created, some with inception dates after January 1980, but no later than July 1, 1993. Eligible securities must be rated investment grade (Baa3/BBB- or higher) by Moody’s and S&P and have at least one year until final maturity, but in practice has a fluctuating average life of around 12.8 years. This total return index is unhedged and rebalances monthly.

The MSCI EAFE Index is designed to measure the equity market performance of developed markets (Europe, Australasia, Far East) excluding the U.S. and Canada. The Index is market-capitalization weighted.

The MSCI Emerging Markets Index is designed to measure equity market performance in global emerging markets. It is a float-adjusted market capitalization index.

The MSCI Europe Index is a free float-adjusted market capitalization index that is designed to measure developed market equity performance in Europe.

The MSCI Pacific Index captures large and mid-cap representation across five Developed Markets (DM) countries in the Pacific region. With 470 constituents, the index covers approximately 85% of the free float-adjusted market capitalization in each country.

The Bloomberg Commodity Index is a broadly diversified index that measures 22 exchange-traded futures on physical commodities in five groups (energy, agriculture, industrial metals, precious metals, and livestock), which are weighted to account for economic significance and market liquidity. No single commodity can comprise less than 2% or more than 15% of the index; and no group can represent more than 33% of the index. However, between rebalancings, group weightings may fluctuate to levels outside the limits. The index rebalances annually, weighted 2/3 by trading volume and 1/3 by world production.

The S&P GSCI Crude Oil Index is a sub-index of the S&P GSCI, provides investors with a reliable and publicly available benchmark for investment performance in the crude oil market.

The S&P GSCI Gold Index, a sub-index of the S&P GSCI, provides investors with a reliable and publicly available benchmark tracking the COMEX gold futures market.

West Texas Intermediate (WTI) is crude oil produced in Texas and southern Oklahoma which serves as a reference or "marker" for pricing several other crude streams. WTI is the underlying commodity of the New York Mercantile Exchange's oil futures contracts.

The U.S. Dollar Index is a weighted geometric mean that provides a value measure of the United States dollar relative to a basket of major foreign currencies. The index, often carrying a USDX or DXY moniker, started in March 1973, beginning with a value of the U.S. Dollar Index at 100.000. It has since reached a February 1985 high of 164.720 and has been as low as 70.698 in March 2008.