Perspectives from Above the Noise -- Week of September 25th, 2017

U.S. stocks ended narrowly mixed on Friday and on the week as Wall Street stayed near the sidelines after North Korea intensified its threats against the United States. President Trump responded by authorizing sanctions against individuals and corporations doing business with North Korea. Meanwhile, central bank policy also garnered investors’ attention last week after FOMC policy members left interest rates unchanged at 1%-1.25% on Wednesday. The Federal Reserve also confirmed that they will begin reducing their balance sheet by $10B in October, while their so-called “dot plot” chart of members’ rate expectations forecast one more rate hike this year (likely in December). San Francisco Fed President John Williams said he individually forecasts gradual rate increases over the next few years to reach a “new normal lending rate of 2.5%.”

Chart of the Week: FOMC Brings Down Long-Run Projection 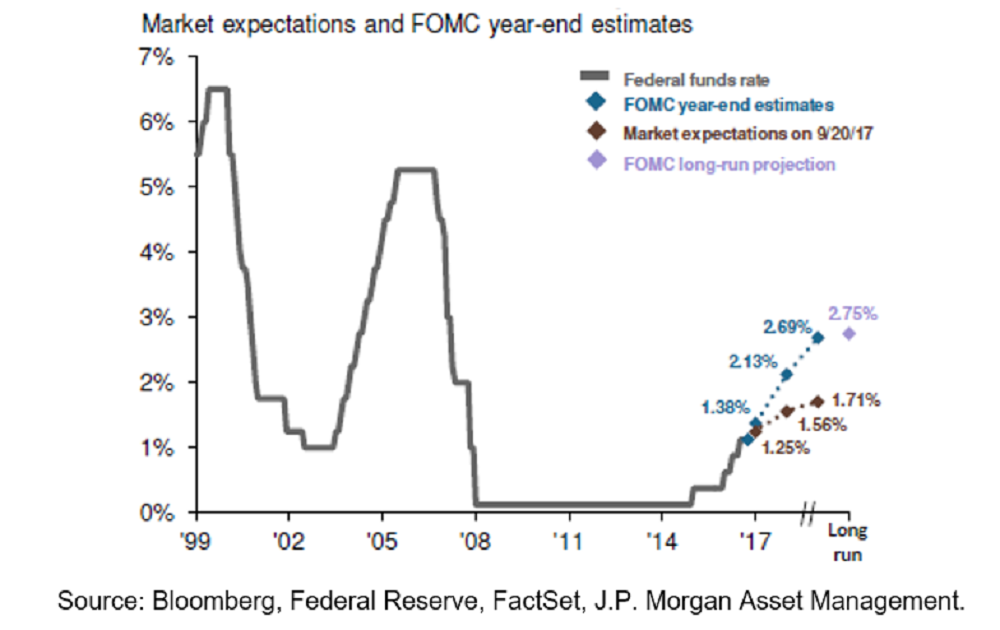 The Federal Reserve's September policy decisions and communications last week were largely as expected, with no change in short-term interest rates and confirmation that the Fed's balance sheet normalization plan will commence in October, following the path laid out at the June FOMC meeting. Policy committee members cited continued strength in the labor market and moderate economic growth as the deciding factors. Regarding future interest rates, FOMC participants continue to expect one more federal funds rate hike this year, and three further interest rate increases in 2018.

Chart 1 shows that longer-term rate estimates were revised slightly lower, with 20bps shaved off of 2019 and the long-run estimate moving from 3.0% to 2.75%. While policy outcomes were largely as expected, the path laid out for interest rates and the balance sheet, combined with a weak dollar and the potential for a more expansionary fiscal policy, may apply more upward pressure on long-term bond yields than seems priced into the market. According to J.P. Morgan, the Fed’s communications suggest a more hawkish path of policy actions despite the dovish tone and careful wording by Fed Chair Janet Yellen's comments.