Perspectives from Above the Noise -- Week of February 20th, 2017

Stocks rose to new record highs last Friday, capping the benchmark S&P 500’s fourth weekly advance, the longest stretch of gains since July. Investor sentiment got a boost following a pledge from President Trump that his tax reform plan will be released in a matter of weeks. Meanwhile, in Congressional testimony, Federal Reserve Chair Janet Yellen said that “waiting too long to remove (rate) accommodation would be unwise,” adding that further rate hikes are likely needed if economic recovery remains on track. Financials led the advance during the week, while all but nine of the 60 companies in the healthcare sector posted gains. The Stoxx Europe 600 Index registered a third straight weekly gain, rising 0.9%; while the MSCI Emerging Markets Index advanced just shy of 1% last week. 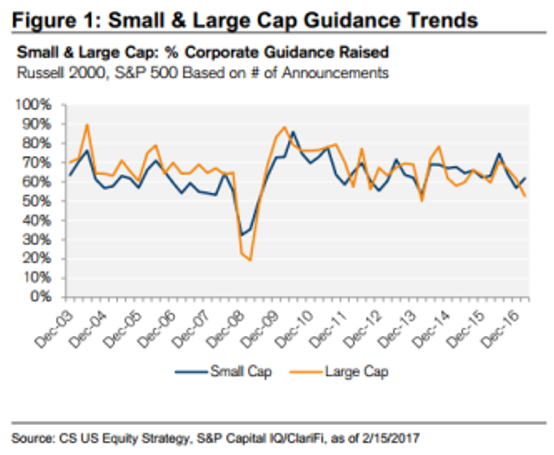 With around 78% of S&P 500 companies reporting fourth quarter results to date, 75% have beaten analysts’ consensus EPS expectations and 51% have topped their sales expectations.  Forward earnings guidance trends, however, remain weak for large caps and better for small caps. Overall, large cap consensus earnings growth expectations for the fourth quarter have moved higher, but first quarter 2017 and full-year guidance have edged lower.  For mid and small cap stocks, 74% and 64% have respectively beaten consensus profit forecasts, while 56% of midcaps and 57% of small caps have exceeded their sales expectations.